25 Most Asked Questions about rally cars 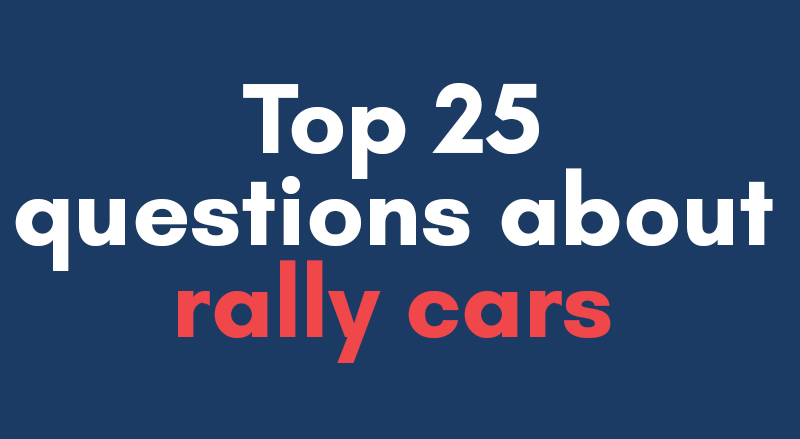 We’ve gathered 25 most searched questions involving rally cars and asked our team and other people actively involved in rallying, to provide the answers.
So, without further ado, here they are..

1. What are rally cars?
Rally cars are purposely built racing cars which are derived from regular cars to drive a rally, which is is done on sections of closed public roads. Rally cars must be built to comply with all FIA regulations to be eligible to enter the competitions. List of most rally cars can be found here.

2. How are rally cars built?
Rally car is at first glance the same as a regular car, but actually, the only common thing is the bodyshell, which is the base for constructing a rally car. To make a rally car, you need to buy a regular car, take everything apart until you are left with a bare chassis, chop off everything that is not required to make it lighter, weld all the current welds and add new ones to the spots, where chassis could brake while landing a jump. Then install a rollcage, engine, brakes, electronics and interior parts like racing seats and seatbelts, extinguisher, switches, intercom and other components. Every modification made and every part installed needs to comply with regulations in order to achieve homologation and be able to compete on rallies.
For manufacturer cars competing in WRC, there were strict regulations of how many regular cars were needed to be produced until a manufacturer could request for a homologation for a rally car (200+ in Group B era, 2500+ Group A).
Rally cars are purposely made for racing and they need to be maintained and serviced after each event.

3. What tires do rally cars use?
Rally cars use special racing tires, which are different based on condition and driving surface (tarmac, gravel, snow). Take a look at our previous post about WRC Rally tyres to learn more in details about each tyre available on certain rallies.

4. What fuel do rally cars use?
Rally crews that are driving just for fun and on a budget, supported by some friends, are most commonly using regular petrol fuel as they were in everyday’s road car, while those with better cars and higher budgets, all the way to World Rally Championship, use racing fuel with higher octane number, like Panta Racing fuel, which is the official distributor for WRC rallies. Just for better presentation, a price of a litre of racing fuel is on average as 6-8 liters of regular fuel.

5. What suspension do rally cars use?
Rally cars use different suspension based on conditions / surface they are driving on. For tarmac only rallies, they use harder, stiffer suspension and the car stance is way lower for better handling, while for gravel racing, suspension is high and soft to better sustain an impact on landings after the jump.

6. What engine do rally cars use?
Rally cars are sorted into classes / groups, based on their engine capacity, ranging from 1067cc (R3D) to 2000cc (RGT, Group N). The WRC cars are restricted to using 1600cc engines. Cars may be naturally aspirated or turbocharged, ran by petrol fuel, with exception of class R3D, which is for diesel supercharged engines. You can find more about engines here.

7. What are good / best / top rally cars?
It’s hard to provide a straightforward answer to this question,  as it’s always subjective, for some the best cars were beasts from Group B, for some current WRC generation, while others prefer the middle like Peugeot 206 WRC or Ford Focus. But if we consider cars based on WRC wins, the best cars are Subaru Impreza and Lancia Delta Group A.

8. What are group B rally cars?
The so called “Golden era of rallying” was introduced in 1982 as a replacement for Group 4. It had only few restrictions, with weight kept as low as possible, no restrictions on boost, resulting in double increase of power from 250hp to more than 500hp until 1986.
Massive power in a low weight cars provided spectacular rallies, so the number of spectators quickly rose as well. But this also proved to be a problem, as lack of crowd control (people standing on the road a second before car arrived) and massive, almost uncontrolable power of the cars caused a series of fatal crashes, with 1986 Tour de Corse and death of Henri Toivonen and Sergio Cresto in a Lancia Delta S4 terminating the Group, as within hours after the crash, the Group B was banned from competing in the following seasons, with Group A becoming a standard for all cars until introduction of WRC regulations in 1997.
Most used cars: Audi Quattro A1,A2,S1; Lancia 037,Delta S4; Renault 5 Maxi Turbo, MG Metro 6R4, Ford RS200...

9. What are good cheap rally cars?
Cheap is a relative word, but if we take in consideration some entry level cars, there are: Peugeot 106 or 206, Citroen AX or Saxo, MG ZR 105, Opel Corsa, Honda Civic, Ford Escort etc.

10. Where to buy rally cars?
To buy a new car, you can contact one of the manufacturer teams making them. The most common are R5 class cars made by M-Sport, Skoda Motorsport, Hyundai Motorsport and Peugeot Sport.

11. Where to buy used rally cars?
You can find a few hundred of them available in the rally cars for sale category on racemarket.net.

12. Why do rally cars drift?
Rally cars do not drift in the proper meaning of the word, drivers tend to use the handbrake on hairpin turns as it’s easier to turn and less time consuming, while drifting as you see on gravel roads (like in Finland) is just to achieve faster speeds through corners.

13. Why do rally cars backfire and how?
The backfire and loud popping is caused by the anti-lag system where fuel is squirted directly into the exhaust manifold before the turbo with the intention of keeping the turbo spinning at high speed so there isn’t any turbo lag, once the green light turns on. 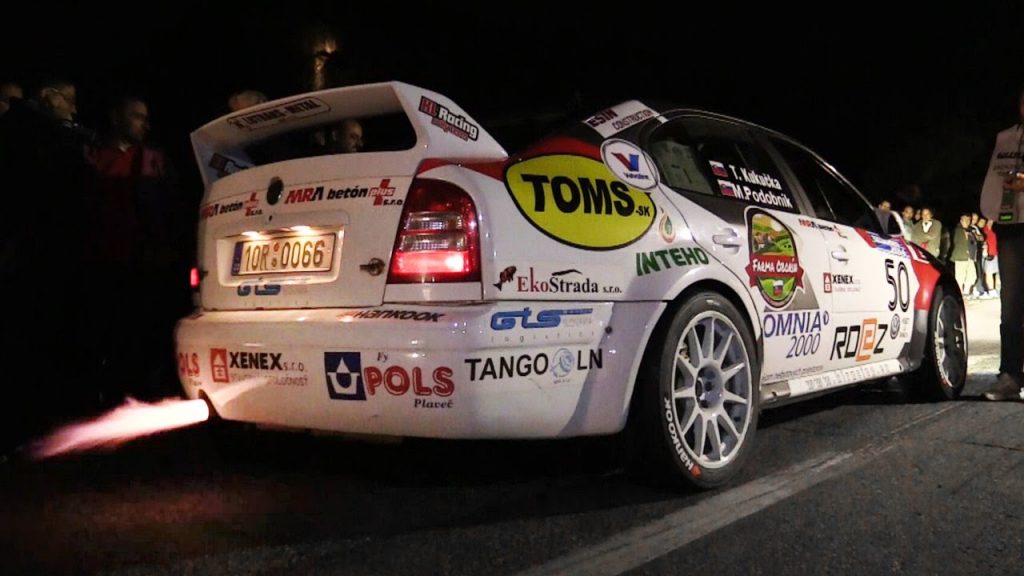 14. How much do rally cars cost?
Rally cars price varies based on class the car fits in. It may start from a few thousand euros for an entry level older used cars like Peugeot 106, Citroen AX or Saxo, MG ZR 105, continue with Group A and N cars like Mitsubishi EVO or Subaru Impreza in range from 20-40.000€, R2 class cars for around 50.000€ and rise to about 250.000€ for an R5 class car like Ford Fiesta R5, Škoda Fabia R5, Peugeot 208 T16 R5 and so on, while the new WRC rally car is estimated worth around 750.000-1 million euros.
The stated prices above are just the amount to buy the car, while maintenance is another story.

15. How to race rally cars?
First you need to decide whether you’ll be the person to handle the wheel or the person sitting on the right side (or left in LWD cars) and provide instructions to the driver.
If you want to become a rally driver, there are certain skills and requirements you need, so learn more in how to start rallying guide, while for co-drivers check our guides on What makes a good co-driver and rally pacenotes – explained.

16. Can rally cars be street legal?
Rally cars are road legal and registered cars, as during the road sections between special stages they need to drive on public roads and respect all the traffic rules. So, it won’t be against any rule, if you drive a rally car to work everyday, although we believe it won’t be really friendly for your wallet.

17. How fast can rally cars go?
With rally cars, it’s not about the total high speed, it’s about the speed that the car can produce while going through corners. Rally stages are closed public roads, so they often do not include longer straights like drag racing does, and if they do, rally security marshalls require from the organizer to make a chicane from hay bales to prevent rally cars reaching the limit and potentially crashing on the next corner. But current generation of rally cars can reach around 200 km/h on straight tarmac roads, but FIA tends to keep an average rally stage speed under 130km/h to be still considered safe for the crews and the spectators. 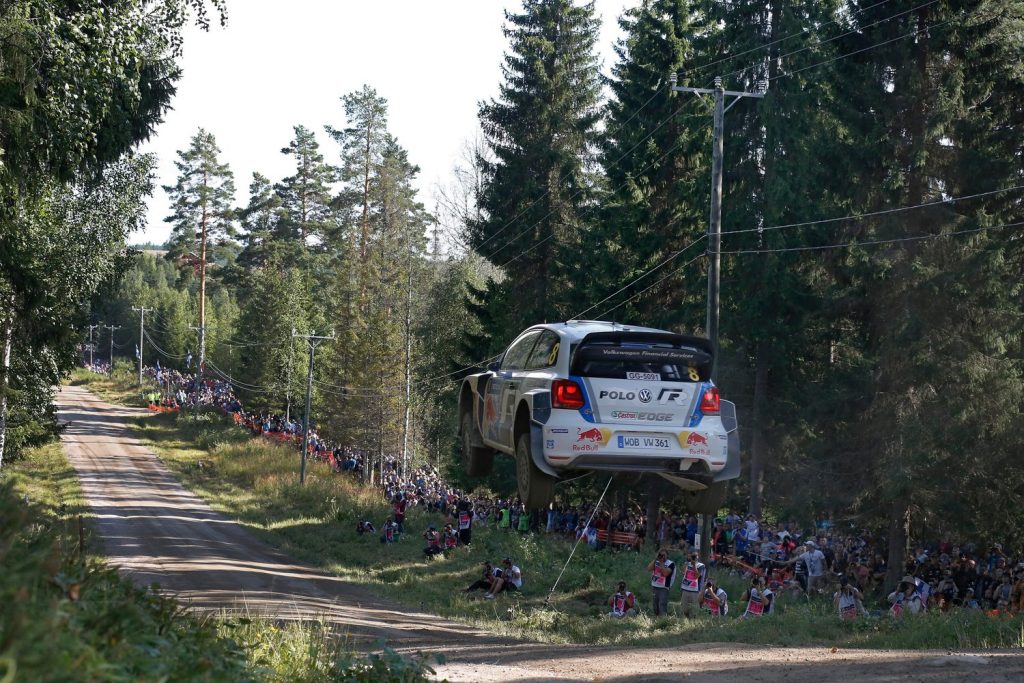 18. Are rally cars AWD / FWD / RWD?
Most of the cars in lower classes have front-wheel drive (Group A, R2, R3), some of them are RWD like BMW or Lancia 037, while Group N with Mitsubishi Lancer EVO and Subaru Impreza are four-wheel powered, as they are all higher classed R5 and WRC cars.

19. Are rally cars lowered / lifted?
Rally cars are lowered or lifted based on conditions the rally will be driven on. They are lifted on gravel rallies, while lowered on tarmac.

20. Are rally cars manual or automatic?
Automatic gearboxes would not suit rally cars for many reasons, they are slow to change gears, they take all the fun out of rallying and of course, they do not allow driving on high RPM, which is something that rally car does during whole rally stage.
Some rally cars use regular manual H-pattern gearboxes, while the others use sequential gearboxes, where gears are selected in orders, so the driver has only a lever which is pulled back to shift up and pushed forward to downshift. WRC rally cars use paddle-shift system on the wheel to react even faster. 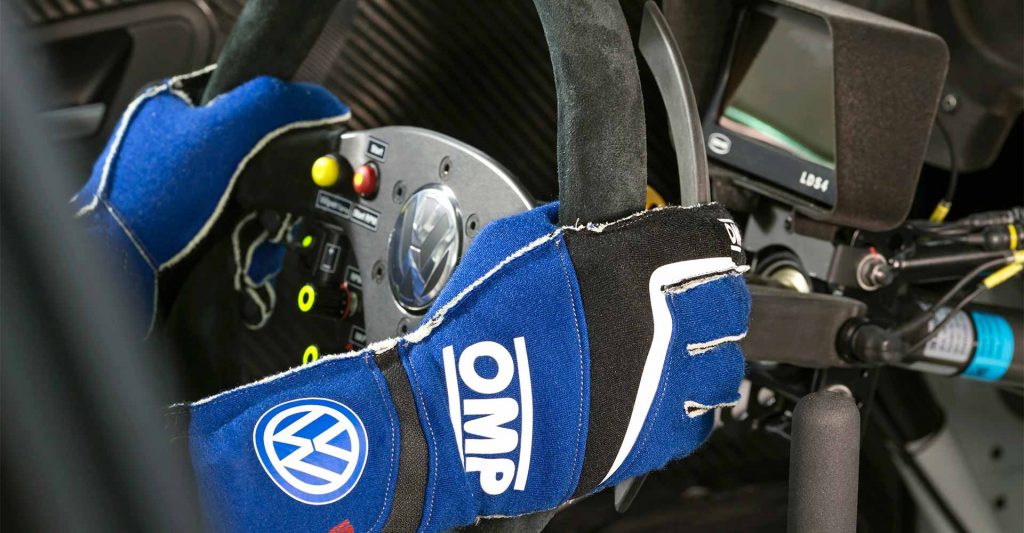 21. Why does a rally car have a rollcage, but regular car doesn’t?
Cars would be much safer, if they all had rollcages installed, but due to their structure and to keep strength, they need to be crossed on the back, which makes rear seats useless, on the roof, which leaves you with less head space and on the sides, which will make entering and leaving the car like climbing on the child playground, so overall, not really handy for daily use.

22. Why are rally cars left hand drive?
They are not. You can right hand drive rally cars in countries where regular cars are driven on the left, like UK, Ireland, India, Japan…

23. Why do rally cars have roof scoops?
To keep the crew inside cool, as they do not have any air conditioning, so the temperature inside the car may reach up to 50°C in summer rallies. Add a few layers of protective clothing on top and see how it feels for the crew. While on the gravel rallies, it also has another important function to pressurise the interior of the car slightly. This small increase in pressure keeps out dust and sand which would seriously impeed the driver’s vision and make it much harder for the co-driver to read pacenotes.

24. Why do rally cars have mud flaps?
Mud flaps protect the car doors, quarter panels and undercarriage from damages when driving over the loose surface. They also stop a decent amount of gravel flying from the rear wheels to the car behind you or spectators around the track.

25. Why are rally cars small?
Manufacturers tend to select the model, which they want to promote to people (spectators) to increase sales of the regular car model and since the most common cars sold in Europe are hatchbacks, today’s generation of WRC consist of rally cars based on Ford Fiesta, Toyota Yaris, Hyundai i20 and Citroen C3. Besides they are smaller and therefore more agile, lighter and easier to service.