How to start rallying? 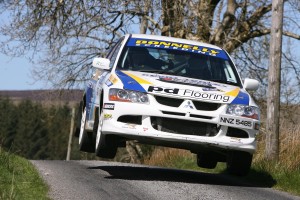 So, you’ve seen some WRC rallying on TV or you’ve been on local rallies, standing there in the crowd and thinking “I wanna do that too!”.  And now you are here, searching for answers on how to do that. Maybe we can help with this article. Main things required are: racing licence, a car, spare parts, equipment, co-driver and service team and some sponsors to back you up. But we’ll go into details of each one later on.

You need a valid driving licence for starters, as without it you can only compete in closed circuit racing, which rally isn’t. Afterwards you need a racing licence, instituted by FIA or FIA approved national motorsport association. How to get that depends on country you are in, so check your motorsport association for details,  but mostly you need to pass the course (exam+practical) and medical test to achieve it.

Once you acquire your licence, it all basically depends on the budget further on.

As you are most likely not a billionaire with a few hundred thousand euros to spend, you probably won’t start rallying with Ford Fiesta R5. And ever if you are, we wouldn’t recommend it, as even if you think you are a great driver and you drive your regular car well, these cars are a beast and you won’t be able to control them.

Do as the best did, start from the beginning. Sebastien Loeb started with Citroen Saxo and look where that brought him, while Sebastien Ogier’s first rally car was Peugeot 206. So, start with cheaper entry level cars, master them and slowly progress to higher budget cars, if you are able to. Also have in mind, that you need to adjust your car selection to your rally licence as it may be valid only for certain range (classes) of cars.

So, Peugeot 106,206, Citroen Saxo, Renault Clio mk1 or mk2, MG ZR105 or similar rally car, all of which you can find for sale on racemarket.net, is your best option. Then you can proceed to R2 class after a season or two. When buying a car, check if all parts are FIA holomogated, especially seats and seatbelts (harnesses), because if homologation has expired you won’t be able to enter any rally as you won’t pass the scrutineering (technical check before rally). You’ll have to replace expired parts with new ones, so that could bring additional expenses.

Rally cars are running full capacity during races, so things can broke quite easily. Things like drive shaft, which can break quickly, gearbox failures, engine overheating and so on. To ensure proper running, you must rebuild your car every couple thousand kilometers. But if something goes wrong during rally, you probably will have to retire or fix during service time, if you can. That’s why you need additional spare parts in your service truck, so you can quickly repair your car, as we all know service times are quite short.

But the most important part are tires. They are the only part of the car which connects to the surface you are driving on, so you need to ensure they are good, so they can provide maximal stability and safety. Of course racing tires are not as regular ones and they worn out quickly, so you won’t be able to drive whole rally with just one set of tires. Bear in mind that you need different type of tires for gravel, tarmac, rain and snow.  So always check track specification and weather report before you go to a rally.

You and your co-driver, of which we’ll talk more about later, need to have proper safety equipment in order to enter a rally, all of which also needs to be FIA approved and with valid homologation.  This basically includes helmet (open or closed) with intercoms, so the driver can hear co-driver reading pacenotes, balaclava, fireproof underwear, racing suit, boots and gloves. All this equipment needs to sustain at least 7 seconds in a fire by FIA rules, so you can safely climb out of a car if an event like this occurs. Another obligatory equipment is HANS (head and neck safety) device, which is designed to reduce the risk of neck injury in an accident, as shown in image below.

HANS device in use

As we mentioned earlier, you probably and sadly are not a billionaire, so you won’t be able to afford a professional service team to prepare and repair you car during rallies. You can do it by yourself, but after you finished a long stage and you have only 20minutes to rest before the next one, will you really spend them changing tires, cleaning windows and making repairs? Well, if there is no other way, you would have to.

But usually here comes friends. Every man knows how to change a tyre, so even if your friends are not professional mechanics, they will be able to help you out by changing tires, while you can sit down and have a rest. A true friend will spend his weekend helping you do the things you love, just for a few beers and a thank you, even if he’s not a motorsport enthusiast.

Next to a team, you also need a trailer to transport your car to the venue, service van which usually tows this trailer and where you can put all mechanic’s gear, tools, spare parts, wheels and other equipment in the back. An organizer usually requires a plastic cover on the floor in case of oil leaks, while a gazebo will make your team’s day easier in a sunny or rainy day.

A co-driver needs his/her own co-driver licence, which he/she may acquire the same as the driver. A great co-driver must be fully focused, punctual, has to cope with pressure and car sickness and takes care for the timing (entry, service etc..). If a co-driver gets confused and reads just one turn wrong, then whole pacenotes of that stage are wrong and until they figure out where they actually are, they could already crash or lose way too much time.
But above all, driver and co-driver need to trust each other, as their lives depend on this trust. They may be feeling safe with roll cage and all safety equipment, but a driver still risks his life by doing exactly as co-driver says, while co-driver does the same by sitting in a car, trusting driver’s abilites to safely take them to the finish. So, once you establish trust, you’ll do a good reece and a good race.  We’ll talk more about reece in one of  our next articles.

Finding a sponsor to back you up in rallies isn’t easy. Surely you won’t buy a car and say “Hey Red Bull, come sponsor me!”. Because they most likely won’t. It all depends on where you are racing. When starting, you’ll probably compete on some local or national rallies, so at first, you may ask local companies for sponsorship. But to really get some offers or successful request, you need to prove yourself. Win a rally or be in top 5 in your class during a season and sponsors will find you, once they see you have potential.

So here is the quick tour to rally world. We hope you’ve learned something useful and don’t miss our next articles, where we will talk about things that this one didn’t fully include like recce, scruteneering, rules, car groups and many more. Also, if you have any questions, use the comments below and we’ll try to answer.