Rally pacenotes: what, why and how? 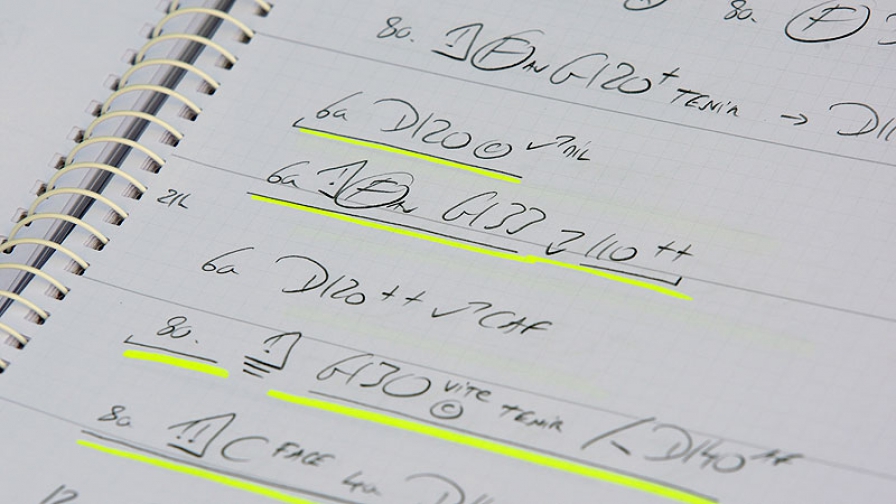 If you ask a normal person, what this is, most of the answers will be “a binded notebook with strange numbers”. Based on Wikipedia, pacenotes are “a commonly used method of accurately describing a rallying route to be driven in extreme detail”.  But if you ask a rally driver, it’s a crucial requirement, which can make a difference between good and bad stage, finishing or crashing, surviving or getting hurt. That binded notebook is the only information the driver has about a stage, so it’s priceless and if it gets lost or misplaced, the crew cannot start the rally.

The notebook
But let’s go back to the beginning. The notebook. Some use a regular spiral binded notebook, some more special ones with additional fields (stage name, page number etc) already printed on, better paper (high quality, less glare, reinforced base).  Why is it crucial to be spiral binded? There are many advantages with this system. First of all, it allows a full 360° page turnaround, while the binding can be also simply removed, if you need to rearrange the pages and reassembled again.

Reconnaissance (Recce)
Recce is a part of the rally, which usually occurs a day or two (depends on length and number of entries) before the rally starts, where the crews gather information about a stage and fill our their notebooks with secret language of pacenotes. Usually, each crew is allowed to go through each stage 3 times in a limited time, with regular cars and respecting all traffic rules (huge penalties if they get caught).
On first drive, the driver reads the turns and other info to the co-driver, who is making notes in his book, based on system they agreed to use (more on that later on).  This is repeated on 2nd drive, when co-driver is making remarks and fixing what was wrongfully marked in first drive. If the third drive is needed, the driver can now more freely focus on the drive and listen to co-driver’s instructions they gathered and warns when something is wrong, so they can adjust and fine tune the pacenotes. It’s crucial to get them right to ensure you’ll have a good stage and you’ll avoid crash due to a mistake in pacenotes.
But the main problem is that in recce, as mentioned, they have to respect the road rules, so they drive slower than on the actual rally, where the speeds are up to 2-3x higher. So the driver has to correctly estimate, if he can make it through the turn, where to cut and where rather not to. That’s why the co-driver has a pencil always nearby also during a rally, so if they made a mistake at recce, he can edit that for the next time this stage is driven. Most of the crews also record stages during reece, so they can watch them afterwards and check if something is still wrong.

The secret language of pacenotes
There are plenty of systems and the decision which one to use is a preference of the crew. Some use only R(right) or L(left) and then they add “+” or more of them for harder corners. Another system is FL-HL (flat left – hairpin left), but the most commonly used is system 1-6 (in New Zealand up to 8), but even this differs from crew to crew, as some used 1 as a slowest corner – hairpin, some mark this with 6. What makes it easier for them to understand.

For the sake of this post, we’ll use 1 as a hairpin:

Corners from R2-R5 can get + or – attached, where + means slightly faster corner and – slightly slower. R1 and R6 have only +.

After the corner description you also mark the duration and additional description:
–               normal does not require any addition
– short  short
– lg         long (R2lg)
– Vlg      very long (sometimes also as long long)
– Xlg     extra long
– /xxx   extremely long
– late   Late or very late apex, where the first (fast) part of the corner is less important compared to the second (slow) part.
– >     tightens: when the corner is immediately, without any straight followed by a slower corner (R3>R2 means Right 3 (continues) into R2.
– <      opens: opposite from tightens, when corner is follower by faster corner.
– <>   opens and tightens: combination where first section is followed by a faster one and right after with a slow section.

Straights:
– 50,100,150,200.. distance between corners or next objects in pacenotes. Example: R5 70 L4. Turn easy right and in 70metres turn medium left.
– into    when the second corner or object needs to be taken in consideration when driving through first one, example: R5 into L3, which means that driver should adjust his line through R5 so he can drive through L3 immediately after.

These are just the main ones, there are plenty others as many crews make their own.

But how do you know which one is R2 and which R3?

Usually the drivers label the sterring wheel of the recce car with numbered stickers, based on the system the will be using, like in the attached photo of Hayden Paddon’s recce car, where he uses 7 as straight and 1 for hairpin. So when he drives through stage, the number which aligns with the top of the dashboard (you may see a blue mark on it) through the corner, that’s what the number of corner is and this is told to the co-driver who writes it down. 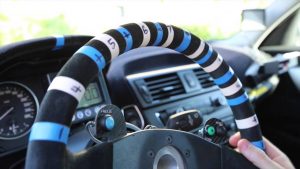 The problem here is, that different cars require different steering angle to go through corners, so you need to adjust these to your car, not copy after competition or place them randomly.
How do you do that?
Here is one method, described by iPACENOTES.COM:
“One simple way to determine steering angle of your car is to set the front wheels straight ahead, then rotate the steering wheel by exactly 360 degrees (one full circle). Now measure deflection angle of both of your front wheels. These angles will be different (the outer wheel will deflect less than the inner one due to the Ackerman angle). Sum the degree change of both front wheels and divide by two to get the average angle. Finally, divide the number 360 by the average wheel angle change and you’ll get the steering ratio.”
But there are also other more complex and accurate methods, which you can check in a blog by iPACENOTES in a link above.

Here is Hayden explaining his sistem in details:

So here it is, our intro into the pacenotes. We hope you learned something new. Good luck!

*Dear Ladies, we know many of you are drivers and especially co-drivers, but we used men’s form in the text for easier understanding. We respect your contribution to the motorsport and are always glad to see you in a racing suit 😉