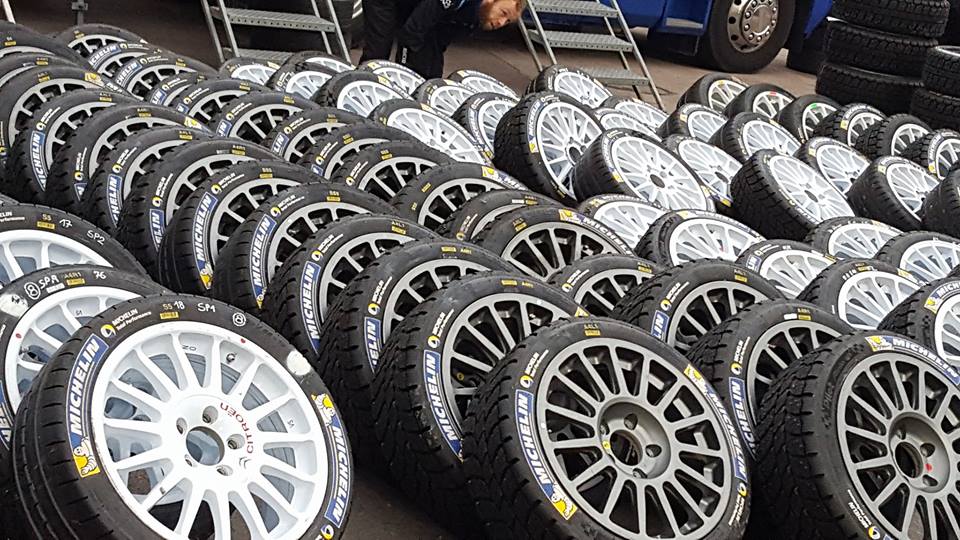 Rally tyres must offer the best grip possible at high speeds in any conditions and any surface.
So how do they achieve that?

First of all, we must look at all different conditions that rally drivers face during the season. And for easier perspective, we’ll look only into World Rally Championship. In season 2017 there are 13 events, from which 8 are entirely on gravel, 2 on tarmac, 1 on snow and two mixed (Monte Carlo – tarmac/snow, RACC – tarmac/gravel).

So they need a tyre for each of the conditions, while these need to be adjusted also on the conditions – surface temperature, where there are 4 options: super soft, soft, medium, hard.

In general, hard tyres are used when the temperatures are high (usually above 22°C) and soft tyre when it’s colder (0-10°c), while a super soft option is for sub freezing temperatures, used in Rally Monte Carlo.
Soft tyre will offer maximal grip, but will wear quicker.

There are two nominated manufacturers for WRC 2017 season: Michelin and DMACK.
For a given rally, all tyres used by a driver must come from the same tyre supplier.

What do these numbers on the rally tyre mean?
On regular cars measurement are in form of 195/50/15 81V (width/profile/tyre size/load size/speed index)
With rally cars it’s a bit different, let’s take an example:


So what are the tyre models that WRC drivers can use?

Special rules apply to studded tyres:
– the studs shall be solid, cylindrical and flatcut, cross section of the studs must form a full circle at every point, studs are not allowed to be tubular, body of the stud must be homogenous and must not form a tube or hole, maximum diameter of the flange is 9mm, while minimum diameter of the metal core in the middle, length of the stud is limited to 20mm and weight to 4grams, must be mounted from the outside and studs must not exceed 20 per decimeter of the wheel circumference.

Common tyre rules:
60.1.2  All cars must be fitted with moulded tyres. Hand cutting or modification of the specified tread pattern is not permitted. Only marked tyres may be used on special stages.

60.1.3 Any chemical and/or mechanical treatment of tyres is prohibited. Any device for heating the tyres once fitted on the rim is prohibited. Whether fitted on rims or not, keeping tyres in an artificially heated environment below 35°C is allowed.

60.1.4  Each tyre must have either:
– Two identical moulded barcode numbers (one on each side of the tyre / each barcode having a different colour as defined by the FIA) supplied by the 2016 FIA‐approved barcode supplier, or:
– A single moulded barcode number supplied by the 2016 FIA‐approved barcode supplier. These barcodes will be used to check that the same tyres remain fitted to a particular car between tyre changes and that competitors are not exceeding the maximum quantities allowed. The tyre barcode must always be visible from outside the car.

60.1.6 The use of any device for maintaining the full performance of the tyre with an internal pressure equal to or less than atmospheric pressure is forbidden. The interior of the tyre (the space between the rim and the internal part of the tyre) must be filled only with air.

60.1.7 Any device designed to clamp the tyre to the rim is not permitted.

60.1.8 The maximum pressure for fitting the tyre onto the rim is 8 bars at 20°C; this pressure must allow the tyre to stick to the outer walls of the rim.

60.1.9 At all times during the event, the tread depth of the tarmac tyres fitted on the car must not be less than 1.6 mm over at least three quarters of the tread pattern. The tyre manufacturer must provide visible control marks.

How are tyres allocated?
Prior to scrutineering at each rally, each tyre company will provide the FIA with a list of barcodes on the basis of which there will be a random procedure (lottery) for the selection of the tyres, overseen by the FIA. Following this selection procedure, the FIA will supply the Manufacturer or WRC Team with a list of barcodes of the tyres that may be used by each driver entered. A driver may only use a tyre that has been registered for his car.

How many tyres can a driver use in a rally?
The quantities of new tyres for use at each Championship event shall be detailed in the rally supplementary regulations and be based on the following:
– A maximum of 7 tyre changes is permitted on any one rally.
– The maximum quantity of tyres allowed on each rally will be calculated as follows: “X” number of changes multiplied by 4 tyres. In addition, 4 tyres for WRC cars and 2 for the other cars are added in the overall quantity. For the Monte Carlo rally, the “X” number of changes will be multiplied by 5 tyres.
– Tyres used during the Shakedown will not be included in the overall quantity allowed for the rally.
– Cars may carry a maximum of two spare wheels.

Credits:
– Images from Michelin and DMACK tyres website, all rights reserved and belong to their rightful owners
– Rules from Appendix J 2017 and WRC Sporting Regulations 2017
– Data from individual events from their supplementary regulations